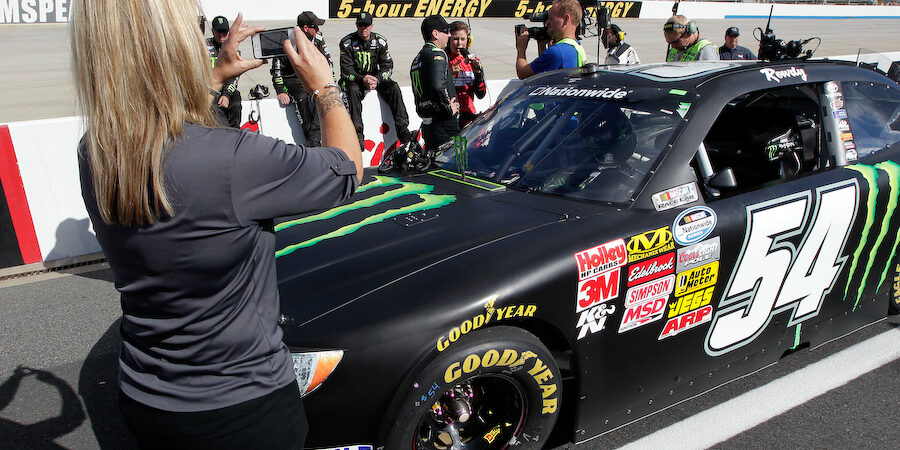 The NASCAR Nationwide Series (NNS) wrapped up the 2013 season Saturday at Homestead-Miami (Fl.) Speedway and the Joe Gibbs Racing (JGR) No 54 Monster Energy team finished strong with a sixth-place qualifying position, 29 laps led and a third-place finish. While JGR and Busch executed a dominant season with 12 wins, 11 poles, 22 top-five and 25 top-10 finishes overall, the Homestead finish left them just short of a season Owner’s Championship, awarded to the No. 22 Penske Racing Ford, a close competitor of the No. 54 team all season. continued…
Upon taking the green flag Saturday night, in row three, the 28-year old NASCAR veteran quickly advanced to third place by lap 15 of the 200-lap race. Busch immediately reported a “tight-handling” car in the middle of the turns and asked his crew for help so the car could turn more in the front. Busch battled on track with other strong teams including the No. 32 of Kyle Larson and the No. 22 of Joey Logano, the Penske Racing Ford that the JGR team kept an eye on considering the targeted NASCAR Owner’s Championship on the line.

The first caution waved at lap 46 and Busch relayed again the level of his car’s tight-handling condition. “I’m really tight, can’t hold the bottom and tight up at the wall.” Crew chief Adam Stevens called Busch down pit road from second place, on lap 48, and the team replenished Goodyear tires and Sunoco fuel with a fast pit stop that put Busch in the top spot to restart the race at lap 61. Through two more yellow-flag caution periods and subsequent restarts, JGR teammates Busch and Matt Kenseth battled strong at the head of the field then found themselves surrounded by Penske competitors all within the top-five.

Another event caution at lap 97 gave the Monster Energy team a chance to make adjustments to Busch’s Camry, now fourth and still too tight to turn the car in the front. Past halfway and back to green the No. 54 gained two positions to second and then to first at lap 102, but not easily. While the pit stop adjustments helped, Busch battled hard for position with the No. 22 and No. 32, and then retained his lead at lap 117 as the field entered another caution period.

The JGR team called the No. 54 race leader down pit road for further adjustments that would now address a loose-handling condition reported by Busch. Pit stop strategies played out by other teams placed Busch in seventh for the restart and heavy traffic offered difficulty for the No. 54 to maneuver back to the front. “I’m loose, then I get there and I’m tight,” reported Busch who continued to battle his car’s handling. A subsequent pit-road visit offered one more opportunity for Stevens to make adjustments to the black machine and the No. 54 would restart tenth at lap153. “We threw all our chips in right here so take care of it,” Stevens relayed to Busch over the radio.

Busch quickly took advantage of the car’s improved handling and drove to eighth on the restart lap, to fifth in the next circuit, then to second by lap 161. Busch had regained the lead at lap 166 and started honing in on the race finish, however, two subsequent caution periods — one that included a long track-cleanup from a hard crash on the frontstretch, caused remaining race laps to expire quickly. During that time some competitors had the opportunity to visit pit road for tires and adjustments that offered them stronger cars at the finish of the race. Busch battled hard to retain position but ultimately scored a final third-place finish.

Busch commented afterwards, “We were back and forth pretty much the whole race with the Penske cars and the 32 (Kyle Larson), so there were some pretty good cars all night. We never had a dominant car and weren’t poised for a win, we were going to have to earn it and we didn’t do that. It was going to be a race for track position there for a while but then at the end of the race, obviously tires paid off, and we didn’t have any and a couple of the other guys did. I hate it for this team, they’ve worked really hard this year and deserve to have a championship. It’s frustrating but it wasn’t just this race that cost us, we had a lot of mistakes this year, a lot of my mistakes too so we’ll have to figure out how to make it better and make it to where we can come back and try again next year.

The Monster Energy athlete continued, “We probably could have won the race but it certainly wasn’t the best car out there tonight. It was a lot tougher for us then what we hoped it to be, but we came home with a solid third, unfortunately today a solid-third wasn’t good enough. A lot of mistakes were made throughout the year, my mistakes too that cost us points. I hate it for everyone at Joe Gibbs Racing and I hate it for Monster Energy, those guys deserve a championship this year and with 12 races won. But I’m proud of the team and the way everyone worked together this year.”

There were 10 caution periods for 49 laps of the race along with 13 lead changes across 10 drivers. Busch led the field five times over 29 of the 200-lap event.

The No. 54 Monster Energy team closed out the season second in the Owner’s Point standings, one point behind the season-winning No. 22 Penske Ford team.

The NASCAR Nationwide Series goes into the off-season now and prepares for a 2014 race schedule that begins on February 22 at Daytona (Fla.) International Speedway. Busch will make his season debut once again in the No. 54 Monster Energy Camry fielded by Joe Gibbs Racing.