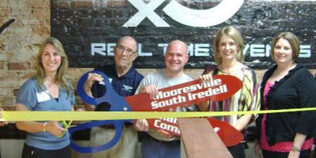 There’s K9 Hair Design in Indian Trail, described as a business “born from 2 ladies who love dogs and love to make them look their best.”

Mooresville’s x9 Real Time Events, which organizes hospitality events around NASCAR events and other local happenings, says it solves the questions, “What do you want to do? Where do you want to go?”

They’re local examples of the hundreds of small businesses and nonprofit organizations across the state and nation that have entered Intuit Small Business Big Game, a contest with prizes that include a 30-second commercial during the Super Bowl, one of the most-watched television broadcasts annually.

Small-business owners who enter this and other contests that involve public voting need to be strategic about the challenge they choose, ensure they can deliver if success follows, and think about the burden it puts on clients and friends if a company is asking them to vote in a new contest every week, said Jeremy Sisk, president of Xperience4Higher, a marketing and consulting firm in Durham that focuses on small businesses.

Sisk likened participating in too many contests to someone going around asking for a date from every girl in the room.

“I become much less attractive if every time they turn around I am asking somebody for assistance, or a date or a vote or whatever,” said Sisk, whose company is participating in the contest.

Before entering a high-profile contest, small-business owners need to ensure their general business affairs are in order and consider whether the contest could hurt them by giving disgruntled customers a reason to speak out, Sisk said.

Ken Phipps, founder and owner of a website SuperBowl-Ads.com, which for 16 years has been posting Super Bowl commercials and the news surrounding them, said last year that a 30-second national spot cost about $3.8 million and was seen on average by 108 million viewers. Such publicity, Phipps said, doesn’t guarantee the success.

In the late 1990s, Mail Boxes Etc., a mailing services company, held a similar contest. Philadelphia-based Jeremy’s Microbatch Ice Creams won in 1999, but ended up going out of business in 2000.

There are other benefits of participating in such contests, beyond raising the profile of a business, said Margaret Shepard, executive director of Communications and Strategy for the U.S. Chamber of Commerce.

In February, the U.S. Chamber of Commerce recognized 100 small businesses across the nation with its Blue Ribbon Small Business Award. Those businesses were then eligible to compete for the 2013 Community Excellence Award, which is determined by a popular vote.

“We found that this program has allowed these businesses to analyze all aspects of how they are doing business, from the staff and the benefits to their client work, and figure out where they are excelling, where they want to focus more,” Shepard said. “I think that sort of holistic view is really helpful to them.”